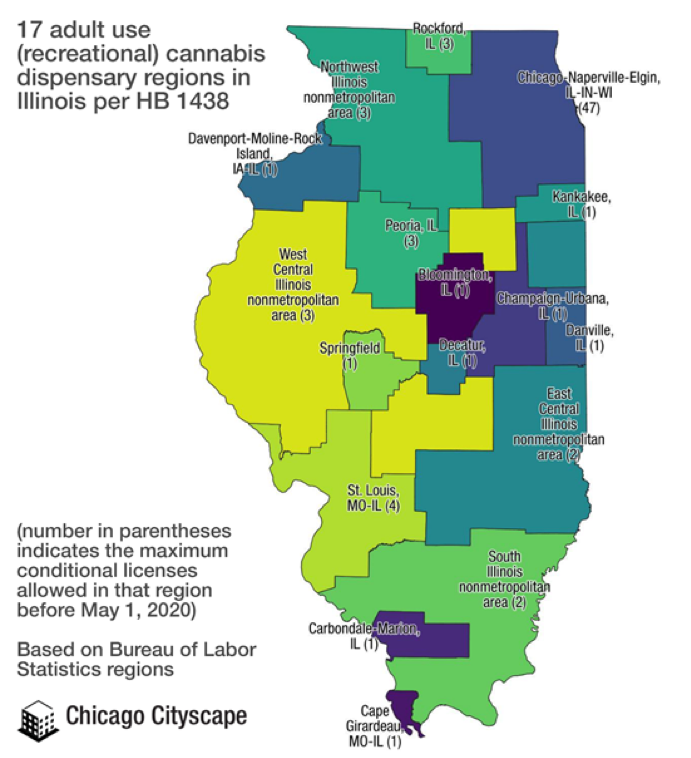 Illinois is shaping up to be one of the most competitive and inclusive recreational markets in the country. When recreational cannabis was legalized earlier this year, Illinois became the first state to accomplish legalization through legislation rather than a ballot initiative. Charlie Bachtell, CEO of Cresco Labs, estimates that the Illinois recreational market will be four to eight times the size of the current medical market in the state. Medical sales are around $130 million per year, while the estimated recreational revenue is around $1.6 billion per year. The bill, HB 1438, makes social equity integral to Illinois’ recreational licensing process.

The map to the left shows the 17 BLS regions where the 75 conditional dispensary licenses available in the first wave of applications will be awarded.

Similar to what has occurred in California, the state of Illinois is currently contending with the issue of local municipalities attempting to prohibit recreational businesses from opening their doors in their neighborhoods. Naperville has already stated they will not allow recreational cannabis businesses, and other municipalities are considering that option as well. One of the most significant regions that have banned recreational sales is the Loop and the Magnificent Mile in the Central Business District in Chicago. Both the Loop and the Magnificent Mile attract substantial tourism for the city. The question is, how will the banning of recreational sales affect tourism for this part of Chicago? There are already over 25 municipalities across the state that have stated they will not allow recreational sales. And some locations, such as O’Fallon, will be taking the decision to its voters through a referendum on the 2020 general primary ballot.

One of the most arduous aspects of securing a cannabis business license is finding a physical building to operate in. Zoning restrictions at the local level, combined with the possibility of landlords being averse to cannabis businesses operating on their property, despite cannabis businesses operating in compliance with state law, can create challenges for applicants. Illinois’ conditional dispensary license application does not require applicants to have a storefront secured when applying, and applicants will have 180 days to secure a building after being awarded a conditional dispensary license. If an applicant cannot secure a location within 360 days of being awarded a license, the license will be rescinded and given to the next highest scorer. However, physical buildings are difficult to find and secure in 180 days, particularly when local zoning regulations are at play and one is competing with other licensees who are seeking viable real estate in the same BLS region (for more on BLS regions, see map above). With that said, it is recommended to already have several locations in mind if not secured before submission of a conditional dispensary license, and it will be essential to have secured a location within a very specific timeframe in order to keep and operationalize a license once it has been won.

While the Illinois market is estimated to be one of the largest in the country, it will also be competitive and expensive. Application fees range from $5,000 to $100,00 depending on the license type. While there are social equity licenses available, they are even more competitive and are only available to applicants who meet certain qualifications. Everyone is waiting to see how many businesses apply and where those businesses are attempting to open their doors. With only 47 dispensaries permitted in the entire Chicago-Naperville-Elgin region, it is sure to be competitive as Chicago is the most populated city in the state and Naperville has banned recreational sales.

Thanks to blog.chicagocityscape for mapping Illinois’ BLS regions (see http://bit.ly/32F4kJc) and stay tuned for more info on Illinois’ process. Also, feel free to reach out to info@i58.65d.myftpupload.com for more information or inquiries as to the availability and scope of our services.